One small step for the microbiome, one giant step for evolution. Are speciation microbiomes just as significant as speciation genes? Do biologists need to interrogate the hologenome theory of evolution at a much broader scale?

In this June 23, 2013 talk at the annual Evolution Meeting in Snowbird, Utah, I presented Robert Brucker's unpublished work from our lab.

The title of this post is adapted from a quote from one of the most important Chinese philosophers, Lao Tzu, circa 6th century BCE. I saw it on Friday and it reminded me of a tweet that Ive been meaning to write. The Lao Tzu quote is:

My tweet would have been something like this (and yes tweeter aficionados, it is less than 140 characters):


"Scientists fail what they stand for if they do not acknowledge their students at the beginning, during, and end of every talk they give."

Here's what is easy to forget. PIs get the big corner office, the love and admiration from the group, the rush from the applause of a seminar crowd. But leaders must sacrifice themselves for those that produce the work. PIs are leaders of their team. But it is not leadership for them, but for their students.

Remember this - Scientists should choose to be lab team leaders because they want to nurture the next generation just as much as they nurture their own children.  Indeed, scientists were once students themselves who needed their own leaders.

But perhaps the need for scientists to promote their students is even more paramount today than generations before, because the scientist pool is bigger than ever (only 14% of life science phds get tenure-track jobs), the competition is stiff, and the grant money is tight.

Put your students first in every thing we do. We are here to service them.

What are your thoughts?

Posted by Unknown at 3:01 PM No comments:

Quick thought here...the NIH director Francis Collins has the coolest double helix on the neck of his guitar. Definitely a must see. But perhaps he should, respectfully, stick to his day job and claw us out of the sequester (though see update below). Or maybe collaborate with BB King to amp up his performance. Now that could get some dollars flowing back at science. Here he is singing "The Sequester Blues" to commiserate with US scientists. Click this link to see the video. 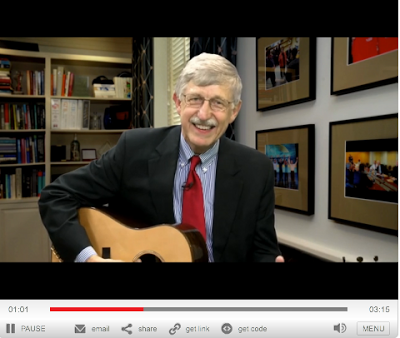 August 26, 2013
NIH Director Francis Collins says he has probably personally visited with more than 100 members of Congress in the last year, at NIH's headquarters or down on Capitol Hill, as part of his campaign to combat sequestration.
"I can't tell you a single one of those meetings that went badly,"he tells the Huffington Post's Sam Stein.
Pumping Congress to find a way to wipe away the sequester cuts, or at the very least exempt NIH or restore funding another way, has become an important part of Collins' job, which also includes singing the blues about the sequestration in a YouTube video.
"And nothing happens," Collins says.
Stein notes that the sequestration is now six months old, and cites NIH estimates that the it will end up cutting more than 700 grants this fiscal year and as many as 1,000 next year, as the cuts would be deeper next year.
"It is so unimaginable that I would be in a position of somehow saying that this country is unable to see the rationality of covering what biomedicine can do," Collins says. "But I'm not sure from what I see right now that rationality carries the day."
Still, Collins tries to see this period of uncertainty and forced thrift as just a part of a long tradition of highs and lows, a "roller coaster" that NIH has dealt with over the years. Things will have to get better at his agency because they always have in the past, he tells himself.
"But as I say those things, I'm not sure I'm completely right, or convinced that I'm telling the truth," he says.