I received this university-wide message today about potentially big changes to how we fund postdocs. Its unclear what will happen, but it is an important message for labs with postdocs.


The Fair Labor Standards Act (FLSA) is the federal law governing minimum wages and overtime pay.  It currently requires that most* employees making less than $23,660 record their hours and must be paid for overtime at 1.5 times their usual rate for any hours worked over 40.  The federal government has proposed a revision to the FLSA which would increase this minimum threshold to $50,440.  This proposed change, which will likely take effect before November 2016, will apply to the wages we are federally required to pay postdoctoral scholars.

Most of our postdocs currently receive salaries of $42,000 or more, and are therefore within roughly $8,000 of the proposed new minimum. Most postdocs regularly work more than 40 hours/week, and it would make financial sense to increase these salaries to the new federal minimum rather than pay overtime.  Yet even for postdocs who do not regularly work more than 40 hours, university leaders believe that redefining postdocs as hourly workers would undermine the professional nature of their work.

Changes to the FLSA, if enacted, would have a significant impact upon department budgets, grant budgets, and more. There are still many details to be clarified, and numerous offices across the university are working to determine possible and best courses of action. The final rule will determine the actions we need to take. In the meantime, we want to be prepared for the likely scenario of needing to increase postdoctoral salaries.

For the present, please do two things:
1.      Alert all necessary members of your department to take these proposed changes into account as needed (for example, budgeting, writing grant proposals, making new offers to postdoctoral scholars, etc.)  Again, changes will likely take effect before November 2016 but the final regulation has not been published yet. No immediate changes to salaries need to be made at this time.
2.      Provide resources for those who have questions:
a.      The documents attached to the email provide some further information.
b.     XXXXX is the primary contact person for specific questions.  She is available for meetings with faculty groups.
c.       Remind those with questions that this is an open issue which is subject to change and for which the university is still exploring options.

*The law provides certain exceptions, including executives, MDs, teachers, lawyers, and trainees. Postdocs whose primary duty is teaching could be defined as holding a teaching position and receive this exception. The federal definition of “trainee” includes that trainees may not receive wages, so this designation is not an option for most postdocs with the exception of those on NIH NRSA training grants.
Posted by Unknown at 9:12 AM No comments:

Just got back from North Carolina State University last week. Eric Miller invited me out for a lecture in his Department of Plant and Microbial Biology. Eric has been involved with various bacteriophage projects over the years, including most recently the HHMI phage genome sequencing project and phages that might be useful for killing bee pathogens. I was really impressed with NCSU and how linked in they are with the various industries of Research Triangle. Nearly every person I spoke to had a collaborative, educational, or financial relationship of some kind with them. I don't often see this kind of collaboration between industry and academia, and it is clearly a model for other universities to follow. As a side note, NCSU just launched a major initiative on hiring new faculty in the area of non-human microbiomes.

Anyway, I presented our long-term studies and recent @srbordenstein work on Wolbachia's phage WO, which has some very interesting features that are unique to the viral world. This work is currently in review. I also covered work by @JMetcalfVU and @DNADiva87 on bioprospecting Archaea for new antibiotics that originally stemmed from our investigations of phage WO (link to paper). Here's the talk that I recorded in Keynote, exported to Quicktime, and posted to YouTube. Comments and questions are most welcome.

Posted by Unknown at 9:48 PM No comments:

The War on Science

There will always be a war on science. Such is the nature of humanity. This video is worth your next five minutes. It speaks for itself....

"Somwhere, something incredible is waiting to be known" - Carl Sagan
Posted by Unknown at 10:50 AM No comments:

There are many reasons why Wolbachia bacteria are one of the most amazing microorganisms that you'll ever read about (and why scientists have studied them for almost a century now). For starters, they curiously dwell inside the cells of animal gonads (testes and ovaries) spanning insects to filarial worms. Second, they can change the gender or reproduction of those insects. Third, they can not only prevent mosquitoes from passing on dengue virus to humans, but they may also be a target for curing diseases such as lymphatic filariasis or river blindness. Fourth, they are one of the best cases of how infectious microorganisms can assist the origin of new species.

Among many other astounding facts, Wolbachia have become so famed apparently in the popular news that they are also now featured in the video game series Metal Gear Solid 5. A friend pointed me to this sound track yesterday with the quote "can't escape it - Wolbachia are now making appearances in video games. Wolbachia in this game are used by the enemy to create a pathogen that kills people speaking only certain languages".

The two clips where Wolbachia are featured are: 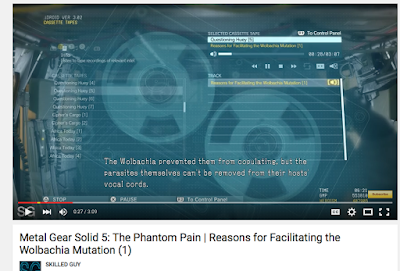 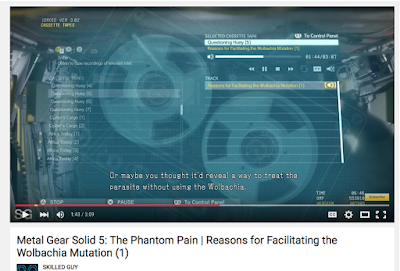