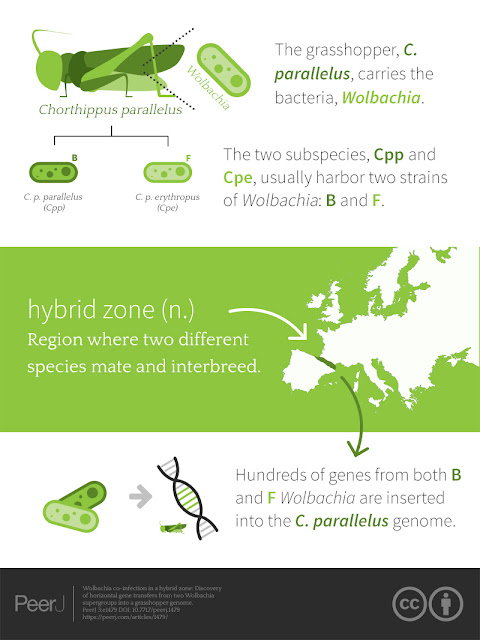 Hybrid zones and the consequences of hybridization have contributed greatly to our understanding of evolutionary processes. Hybrid zones also provide valuable insight into the dynamics of symbiosis since each subspecies or species brings its unique microbial symbionts, including germline bacteria such as Wolbachia, to the hybrid zone. Here, we investigate a natural hybrid zone of two subspecies of the meadow grasshopper Chorthippus parallelus in the Pyrenees Mountains. We set out to test whether co-infections of B and F Wolbachia in hybrid grasshoppers enabled horizontal transfer of phage WO, similar to the numerous examples of phage WO transfer between A and B Wolbachia co-infections. While we found no evidence for transfer between the divergent co-infections, we discovered horizontal transfer of at least three phage WO haplotypes to the grasshopper genome. Subsequent genome sequencing of uninfected grasshoppers uncovered the first evidence for two discrete Wolbachiasupergroups (B and F) contributing at least 448 kb and 144 kb of DNA, respectively, into the host nuclear genome. Fluorescent in situ hybridization verified the presence of Wolbachia DNA in C. parallelus chromosomes and revealed that some inserts are subspecies-specific while others are present in both subspecies. We discuss our findings in light of symbiont dynamics in an animal hybrid zone.
Cite this as
Funkhouser-Jones LJ, Sehnert SR, Martínez-Rodríguez P, Toribio-Fernández R, Pita M, Bella JL, Bordenstein SR. (2015) Wolbachia co-infection in a hybrid zone: discovery of horizontal gene transfers from two Wolbachia supergroups into an animal genome. PeerJ 3:e1479 https://doi.org/10.7717/peerj.1479
Posted by Unknown at 1:53 PM No comments:

Getting the Hologenome Concept Right

Related publication: Getting the hologenome concept right: an eco-evolutionary framework for hosts and their microbiomes (2016)

What is the target of natural selection in animals and plants? From a phenotypic perspective, selection sees trait variation that influences who passes on offspring and who does not. Given this rather obvious tenet, selection at the individual level is effectively selection on the holobiont - the community of microrganisms and its host. Consequently, variation in the collective genomes of the holobiont - i.e, the hologenome - yields variation in phenotypes upon which evolution can act. This hologenome concept of evolution distinguishes itself by placing emphasis on the vast symbiotic complexity and transmission routes inherent in holobiont animals and plants. As we emphasized in a recent perspective, it is also true that just as  large parts of the nuclear genome can evolve neutrally or be in conflict, so too can large parts the hologenome.

Yesterday, I read a skeptical essay on the hologenome concept by Nancy Moran and Daniel Sloan.  I have several thoughts on it. In short, it was great to see the attention on the topic, as all opinions and analyses are welcome at this nascent stage of the framework. Raising the profile of this area was precisely the intent of a recent publication with Kevin Theis, in which we clarified the history and use of the terms, revised the hologenome concept to include new perspectives such as neutrality, and laid a foundation for hypothesis-driven research and theoretical analyses for the field. This article subsequently calls for some of the same, which is great, but it is unnecessarily narrow and divisive at times. I briefly lay out the misconceptions about the article.

From the start in paragraph 2, it wasn't clear if M&S read our publication in detail. They attribute the origin of the word "holobiont" to Mindell (1992) but we showed that it was first used by Lynn Margulis in 1991. I had the pleasure of corresponding with Mindell prior to our publication, and he humbly tipped us off to the false credit. As we state...


The term "holobiont" traces back to Lynn Margulis and refers to symbiotic associations throughout a significant portion of an organism's lifetime, with the prefix holo- derived from the Greek word holos, meaning whole or entire. Amid the flourishing of host microbiome studies, holobiont is now generally used to mean every macrobe and its numerous microbial associates [19,22]

Second, M&S read our article well enough to extract some quotes, which I fully stand by. But they seem to be skeptical while at the same time they do not elaborate on the justifications spelled out in the paper. Take the example of thinking about host-microbe interactions as interspecific epistasis, similar to gene-gene interactions in the same genome. This is just scaling well accepted population genetic epistasis to community genetic epistasis and it has been done by many eco-evolutionary biologists. As we discuss in our essay, theory shows that there is an intellectual continuum between epistasis in the same genome and interspecific epistasis between different genomes, even for symbionts that are horizontally transmitted. This is not controversial or problematic. What is up for experimentation is the degree to which the epistasis comes and goes versus persist for selection to operate on it. The challenges are interestingly the same for both genetic epistasis in the same genome and intergenomic epistasis. There is nothing out of the ordinary here.

Third, I heartily agree with M&S that coevolution has run amok in the microbiome field (without any evidence) and has been applied incorrectly in most cases. Glad to see this getting more attention. It is precisely why I came up with the word "phylosymbiosis" in 2012-2013 because it does not confer coevolution or codiversification apriori to the observed pattern of microbial community relationships recapitulating host phylogenetics.  It does, however, provide evidence for community selection in controlled studies of the microbiota where microbes are assembled in a deterministic manner that parallels host genetic relationships. Controlled studies of Nasonia wasps and Hydra best show this pattern. I also like their Figure 1 on phylosymbiosis and think that it could be improved as both models could be operating at the same time. Some microbes could be strictly evolving in synchrony with hosts by vertical transmission while other microbes may be horizontally transmitted.

Fourth, the essay ignores that hologenomic models fully accommodate mutualism and parasitism. It is a misconception that it does not. Just as selfish genes are part of the nuclear genome, pathogens are part of the hologenome. See Principle 8 of our essay.

Fifth, the hologenome concept fits squarely into multi-level selection theory. Most would agree that it is not correct to say that it is the only unit of selection, but it is equally not correct to say that the concept fails as a whole if there are others level of selection operating. Many levels are operating simultaneously. Moreover, for phenotypic selection, the key point is that nearly all individual selection is holobiont-level selection given the pervasive affects of the microbiota on host biology. The genetic response to selection is what's clearly more challenging to unravel and whether this occurs at a holobiont-level or not is indeed an experimental question worthy of future attention that people are working on.

Sixth, the paper frequently plays both sides of the debate. Obligate endosymbionts and organelles are presented as hologenomic entities, but then the paper at times claims hologenomic evolution could be relatively insignificant or rare. These statements are contradictory.

The paper's abstract concludes that "Although selection at the level of the symbiotic community, or hologenome, occurs in some cases, it should not be accepted as the null hypothesis for explaining features of host-symbiont associations". This opinion is largely based on the inaccurate pretense that scientists are claiming holobiont-level selection without evidence or that holobionts are a kumbaya conglomerate. Neither is true. It is easy to oversimplify any concept to death if one wants to. Yet as Einstein once noted "Everything should be made as simple as possible but not simpler".